Optical transceiver modules are important components in optic fiber communication, converting optic signals into electric signals and vice versa. There are many types of optical transceiver modules, such as SFP, SFP+, QSFP+, QSFP28, CWDM, DWDM modules, etc, each with their own functions and application scenarios. In this article we will introduce about CWDM optical modules and its differences from common types of optical modules.

What is CWDM module

A CWDM module is an optical transceiver module which combines the CWDM technology. CWDM (Coarse Wavelength Division Multiplexer) is a low-cost WDM transmission technology for MAN (Metropolitan Area Network) access layer. In theory, CWDM uses an optical multiplexer at the transmitting end to multiplex optical signals of different wavelengths into one single optical fiber for transmission. At the receiving end of the link, an optical demultiplexer is used to separate the multiplexed signals in the optic fiber into signals of different wavelengths, which are then transmitted to corresponding devices.

(5) CWDM modules need to be applied with multiplexers and demultiplexers. Common optical modules are simply plug and play after connecting with optic fibers and inserting into the switch. 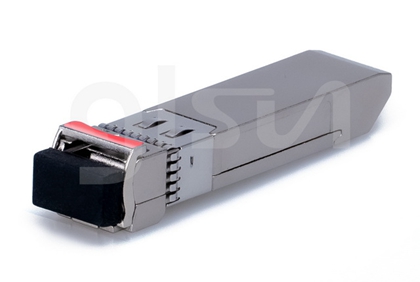 (2) Improve the utilization of optical fibers

For 10G CWDM SFP+ modules, 18 wavebands are available from 1270nm to 1610nm, with a wavelength interval of 20nm. It is widely used in 10G Ethernet, Optical Transport Network (ONT), 10G CPRI fronthaul, and is compatible with SONET (Synchronous Optical Network) and 10G Fibre Channel, with maximum transmission distance of up to 80 km.

Widely used in 25G Ethernet and 5G fronthaul, 25G CWDM SFP28 modules transmit via single mode fiber with data rate of 25G and maximum transmission distance of up to 40km.

In order to help identify the 18 channel wavelengths of CWDM optic modules, the industry has defined the bail latch color of each wavelength. 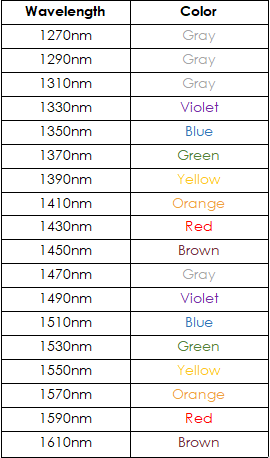