After years of development, there are many form factors of optical modules at the current market, such as GBIC, SFP, XFP, QSFP+, OSFP, QSFP28, QSFP-DD and COBO, and the transmission rate also advanced from 1Gbps, 10Gbps, 25Gbps, 40Gbps, 100Gbps, to 200Gbps and 400Gbps.

What are some of the important specifications of an optical module, besides its form factor and transmission rate? Below is a brief introduction.

Center wavelength refers to the midpoint of spectral bandwidth, and is measured in nm (nanometer). Currently there are 3 main wavelengths used for fiber optics.

- 1550nm (single mode): low loss but high dispersion in transmission, usually used in long range transmission of over 40km, up to 120 km without using a trunk amplifier. 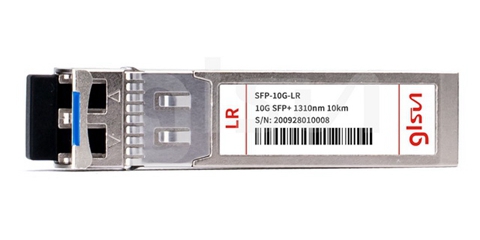 Transmission distance refers to the distance that optical signals can be transmitted directly without using a trunk amplifier. It can be divided into 3 categories: short range (2 km or below), medium range (10 km - 20 km), and long range (over 30 km).

The transmission distance of an optical module is mainly influenced by certain loss and dispersion suffered during the transmission of optical signals over optical fibers.

Loss refers to optical power loss caused by the absorption, dispersion and leakage of the medium in fiber optic transmission. This loss increases with the extension of transmission distance. Dispersion happens mainly because electromagnetic waves of different wavelengths travel at different speeds in the same medium, resulting in the different arrival time at the receiving end for optical signals of different wavelengths as they propagate down the fiber, which causes pulse broadening and thus unable to distinguish signal value.

Therefore, users need to choose appropriate optical modules according to the actual networking conditions and needs, to meet different requirements for transmission distances.

Optical output power (Tx power) indicates the output optical power of the light source at the transmitting end of an optical module, and is measured in dBm (decibels per milliwatt) in fiber optic communication.

The resonant cavity of FP laser (Fabry-Perot laser) is formed utilizing the natural cleavage planes of semiconductor and can only realize static single mode operation. When at high speed modulation, or changes of temperature or current, mode hopping and line broadening may occur. Therefore, it is mainly used for low data rate modules with short range transmission within 40 km.

As a reliable manufacturer specializing in optics products with over 20 years experience, GLSUN provides a full line of optical modules with data rate at 1G/1.25g, 10G, 25G, 40G and 100G, along with professional network solutions and technical support.